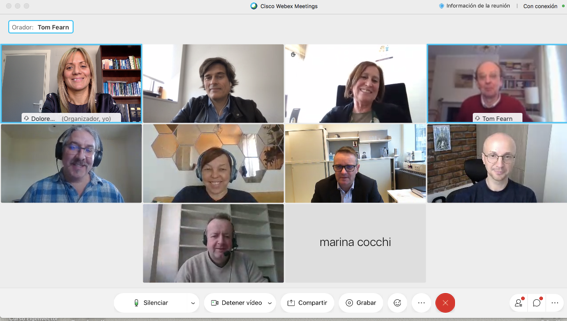 The meeting was chaired by Lola Perez Marin, who welcomed participants and noted the following:

ACTIONS for All: Please be active on the social media, feedback on the website is welcome.

The agenda items were then discussed.

Antonio Ferreira gave a powerpoint presentation outlining plans for this meeting. It will take place in the Universidade Catolica Portuguesa in Porto on the 16th and 17th September 2021.  The local organisers will be Antonio Ferreira and Maria Lopes Cardoso, together with Lola Perez Marin, Tom Fearn and Vincent Baeten. The scientific committee is to be the Action Core Group plus a few local invitees.  The format will be hybrid, with the aim to have as much face-to-face activity as possible, but with facilities that will permit remote participation. The programme will consist of oral sessions in the two mornings, with one keynote speaker each morning, industry showcases in the afternoon of the 16th, and a Management Committee meeting in the afternoon of the 17th.  A dinner will be organised on the evening of the 16th and some social activities offered on the evening of the 17th.

The presentation was followed by a wide-ranging discussion covering:

ACTIONS for all: Input would be welcomed on possible themes, suggestions for keynote speakers and for industrial contributors whether as sponsors/exhibitors or as presenters

There was no other business.